Shine a light on terminal commands. 🔥

Lit lets you create console logs that are only visible after prefixing a command with lit. You can use flags to filter the types of logs and step through your application at runtime, essentially turning your logs into breakpoints. You can press Enter to continue to the next step or press P to begin a Pry session. Lit was originally created to view the reflections generated by Reflekt via the command line, but can be used in a range of applications.

Simply start any command with lit. For example a script like ruby script.rb becomes:

Then run the application and watch the terminal window for Lit messages: 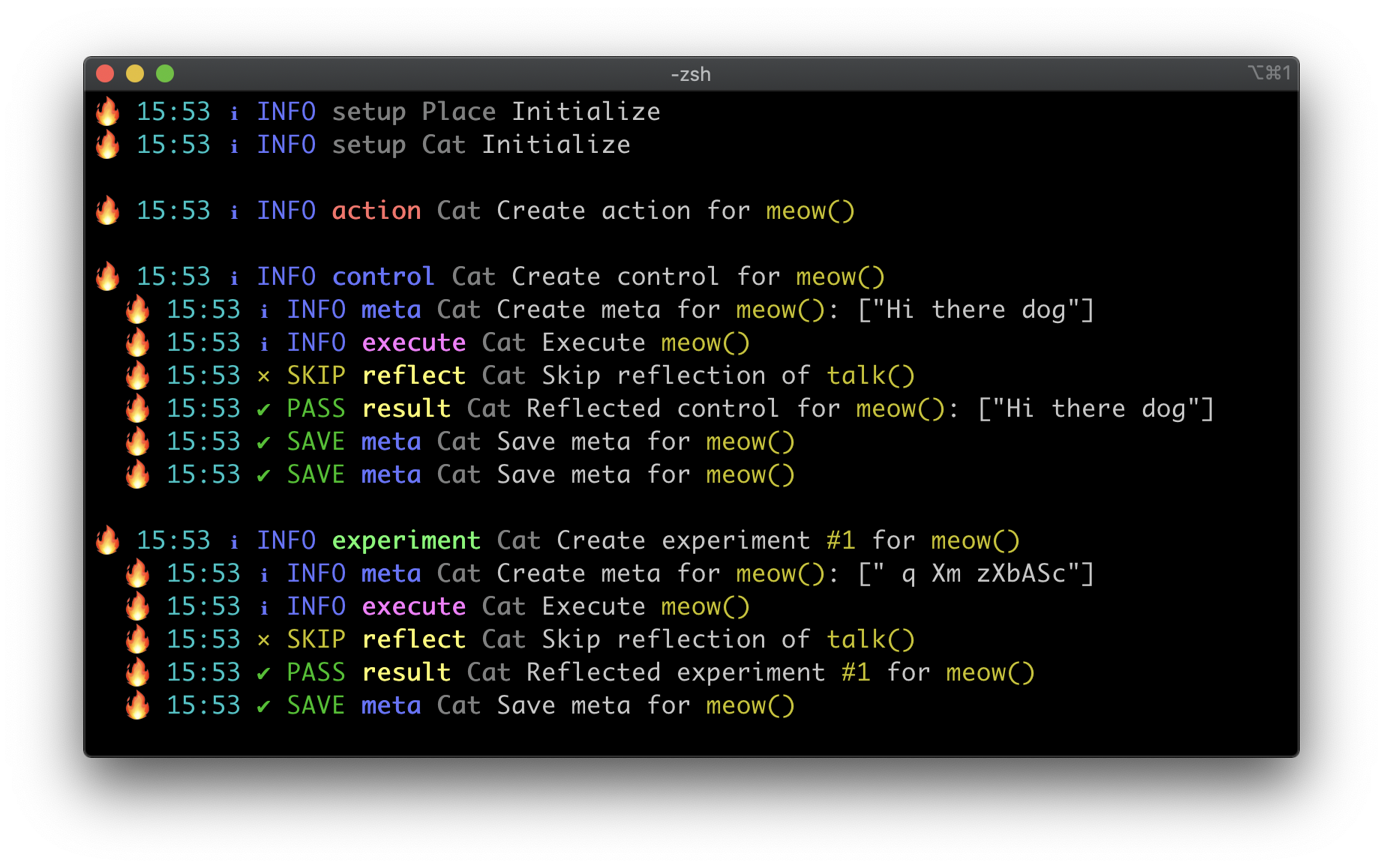 Lit accepts flags to modify behaviour. They are prefixed with an @ and appended after the lit command:

Flags start with an @ instead of a -- so that they aren’t confused with flags for the original command that Lit is firing off.

Step through the code. The terminal will stop at each lit() message, then prompt you to press Enter to continue to the next message or press P to enter a Pry session.

When in a Pry session, enter x to exit Pry or !!! to exit the program (use x; to access a variable called x).

Note: Only files required via require_relative are currently supported for Pry session until this issue is solved.
Note: Pry is not available to lit() messages in the first file to require 'lit_cli', so require Lit in your application’s entry point / main file if you need this feature.

Types are optional and represent the type of data, similar to a class.

Delay the execution of a message to make fast outputting logs easier to read. The default delay is 0 seconds (no delay) but can be any positive Integer or Float, for example:

Note: If an application is currently using Lit then the lit command will already be available in your terminal without any installation required.

Instructions for integrating your application with Lit.

Require lit_cli at the top of your file:

Include LitCLI in your module or class:

Then use the lit() instance method:

Available statuses and types can be configured, see lib/config.rb and demo/demo.rb for more info.

Placing () next to a word will style them as a method.

Placing a # next to a number will style them as a number.

Placing a > at the start of a message will indent the log in the console. Multiple >>> symbols can be used and for each one, two spaces of indentation will be added. Indentation is not preserved when using @status or @type filters.

Placing a ^ at the start of a message will add a line break above the log in the console. Multiple ^^^ symbols can be used and for each one, one line break will be added. Line breaks are not preserved when using @status or @type filters.

You can use the lit() method in place of comments to help document your code. This:

Now you’ve commented your code and your comments double as logs.

You can even use the emoji 🔥() instead of lit() to call the method… cause why not? Climate change is real and we’re all going to die anyway. So the final code could be:

The lit emoji acts as a nice sectional heading too. These are all just ideas and it’s up to you to decide how to write code and save the future of humanity.